Brian McEneny grew up in Southwest Washington. His early adult years were spent working as a ski instructor and pro patrolman on Mt. Hood and Lake Tahoe.

In the early 70s, after numerous knee injuries and surgery pushed him out of professional skiing, he moved to the Oregon coast. There, he met and worked with a couple of carvers who were just starting to use chainsaws to carve wood. He started carving on weekends. By the late 70s, he was carving full time and opened his first gallery in Seal Rock.

When Brian started carving, he did the whole gamut of chainsaw art from bears, eagles, owls, salmon and sea captains to cowboys, indians and totem poles. In the mid 80s, he began carving sea life. Although he still carves the occasional bear and other animals, his main body of work has been marine animals because of their shapes and fluidity.

Brian's carvings are magnificently lifelike. He has the ability to transform a log or piece of driftwood into a beautiful whale, otter, seal, dolphin or other sea animal.

The fine finish he puts on the wood brings out the beautiful grains and color of the local soft and hardwoods he uses. His carvings are being enjoyed in commercial settings and private homes, indoors and outdoors.

Shipping can be arranged on all sculptures. You're invited to view Brian's work in the Online Gallery. 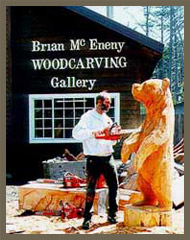